How NationBuilder made democracy more democratic

For any political organization worth its salt, the 2012 election was a rollercoaster ride. For NationBuilder, a Los Angeles startup dedicated to making American democracy more democratic, things were no different.

In the lead-up to the election, the company was pursuing an ambitious goal: to build an accurate nationwide voter database and make its data widely accessible. Candidates for office rely on these kinds of voter files to build their campaign strategies, and historically, reliable access to them has only been available to political campaigns with deep pockets. Though it may sound simple, the goal of creating a comprehensive, easily-accessible, and trustworthy database of voters is actually a bit insane. The United States has 3,100 different counties, and each and every one of them has its own unique process and standards for collecting and maintaining voter records.

To build a national voter database, NationBuilder would have to comb through unbelievable numbers of files, aggregate their data, standardize them and make sure the end result was accurate: After all, you don’t want the candidates who rely on your data to find out later that, thanks to you, they wasted precious resources on outreach to dead people.

As Adriel Hampton, NationBuilder’s VP of Community, points out: “When standards don’t exists to dictate what happens to a voter record when someone moves, dies or leaves the country, it can lead to a big mess.”

This mess is compounded by the widely differing needs of all kinds of campaigns.

“We work in all 50 states doing data work with customers that range in the size and magnitude of what they do,” says Nate Murphy, a Data Manager at NationBuilder. “The data needs for a state senator seat are very different from those for a school board seat.”

To have a real shot, NationBuilder needed to grow its team fast, onboard new hires at breakneck speed, and make sure everyone stayed organized and on the same page at all times.

This is where Asana came in.

Getting Fresh Talent Up To Speed 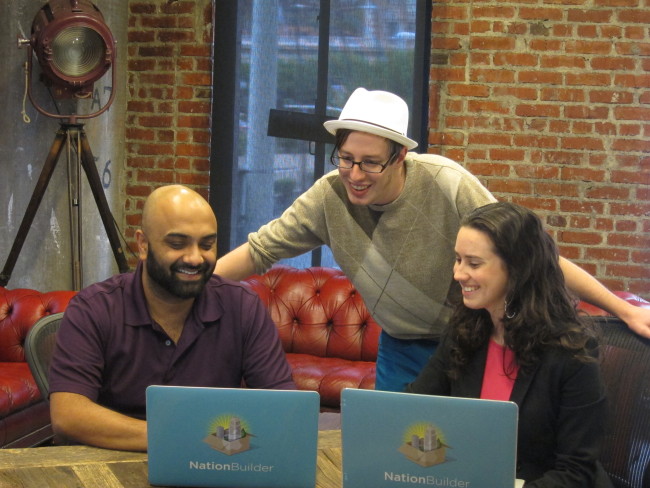 Murphy (the Data Manager) joined NationBuilder at a uncommonly crazy time. The company was in the middle of designing the Election Center, which would become the public face of its voter database. Without access to both historical context and a team-wide view of priorities around this project, Murphy says he would have been at a huge disadvantage.

“When coming into a new company, there are times when you need information, but would have to pester someone and take up his or her time. Using Asana, I could see all of that information, allowing me to read the history and get to work right away,” says Murphy.

Murphy says the speed at which he was able to contribute was “absolutely incredible,” and that without Asana, he wouldn’t have been able to dive into the customer base and understand customers’ needs at all. Because all of the history of NationBuilder’s work lived in Asana, Murphy was able to get up to speed, and to prioritize and delegate work right off the bat, as if he had been a part of the team for months rather than days.

By giving new hires a crystal-clear understanding of their jobs, Asana allowed each of them to hit the ground at a sprint.

A Better Way To Communicate

Avoiding the black holes of email inboxes and messy spreadsheets is important to any modern team. But when your team has to respond to tons of incoming customer requests in real time, frictionless communication is even more important.

As the VP of Community, Hampton, points out, “Managing the status of one State, while coordinating customer requests from politicians mid-election, is incredibly challenging if you don’t have a system to understand where each request and project stand.”

Managing candidate’s data requests in real time, understanding the full scope of the issue and resolving it at a moment’s notice simply isn’t possible if there are barriers hindering communication. But thanks to Asana, NationBuilder’s team’s communication, organization and execution became dramatically more efficient.

As Murphy says, “Being able to stay on top of tasks and not having to constantly think about organizing yourself; knowing you can put your heart and soul in your work and provide a more direct means for using your labor, is important when your plate is so full.”

Because of Asana’s transparency, everyone at NationBuilder had an understanding of where a task or project stood and what the next step entailed — eliminating long-winded explanations and redundant conversations. Asana let NationBuilder’s team more easily collaborate, ensured everyone stayed organized, gave them confidence that nothing would slip through the cracks.

The fruit of their hard work was recognized when the team could finally sit back and take in the finished product.

“I remember the day we finally cleared out the total backlog and had zero pending 2012 data requests,” Murphy said. “When that last task was completed there was a moment when we unarchived every task in Asana and stared at the computer in utter joy.”